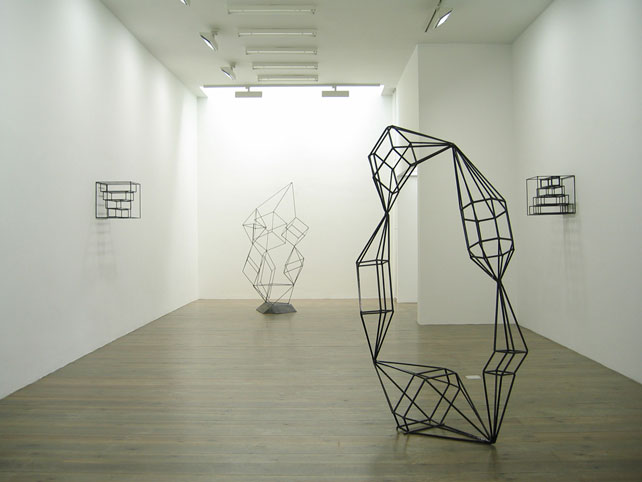 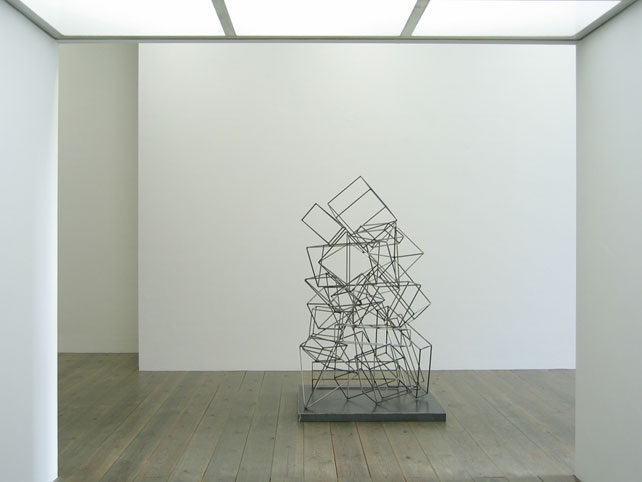 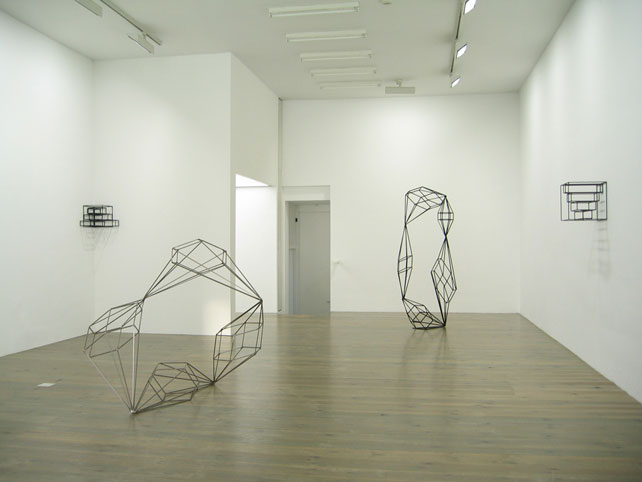 Slewe Gallery is pleased to announce the opening of the exhibition Morphology by Michael Jacklin (*1956, NL). The opening will be Saturday November 15 and the exhibition will last until December 20, 2008.

Jacklin is one of the rare fundamental working sculptors of his generation. He focuses on the specific qualities of the material as well as on the sculptural principles such as mass, rhythm and gravity. Since 1984 he works exclusively with iron. His preference for this material derives from his fascination for iron constructions in architecture. He is known for his series of man-sized grid sculptures and transparent wall objects of thin staff iron. In this exhibition he will show a new series of small iron wall constructions entitled the Stack series in addition to some standing transparant iron constructions entiteld Morphology.

Michael Jacklin, born in 1956 (NL), studied at the Rietveld Academy, Amsterdam and Ateliers 63 in Haarlem. He started exhibiting at Fons Welters Gallery in 1985. In 1990 he received the Charlotte van Pallandt Award. Since 1995 he exhibits at Slewe Gallery on a regular base. In 2010 Slewe published a catalogue with an overview of his work and a text by Maarten Bertheux. In 2002 he had a presentation at the Stedelijk Museum Amsterdam and in 2000 at the Kunstvereniging Diepenheim. His works have been collected by several public and private collections. Jacklin lives and works in Amsterdam. 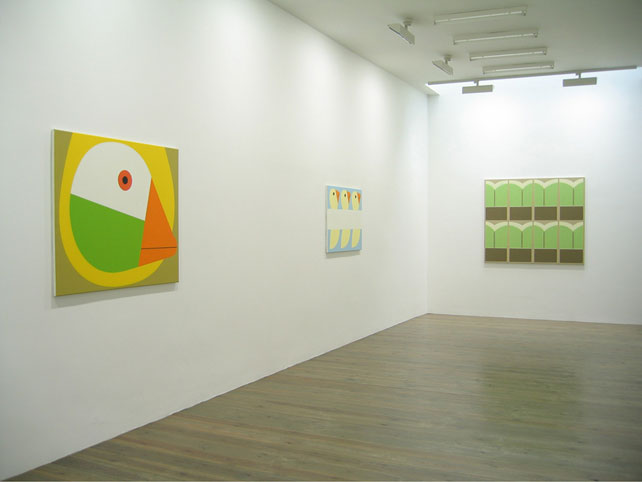 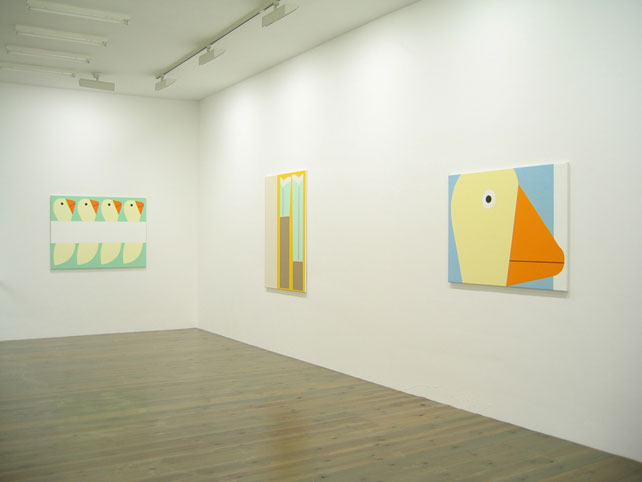 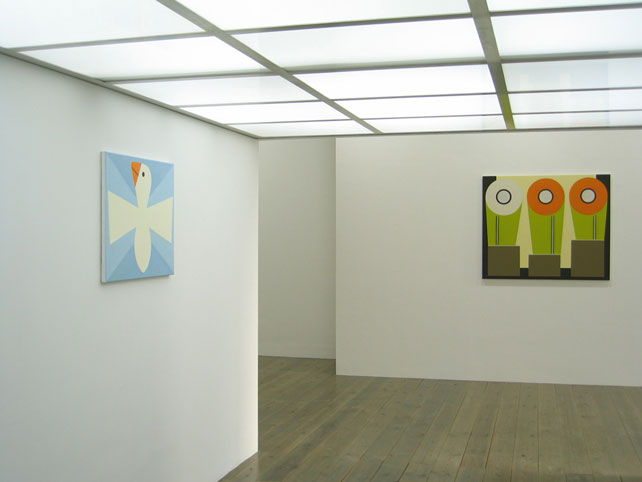 From October 11 until November 8 there will be an exhibition with new paintings by Dutch artist Jan Roeland at Slewe Gallery in Amsterdam.

Jan Roeland, born in 1935 (NL), has built up an oeuvre of paintings which moves between geometric abstraction and figuration. Recognisable simple motifs of everyday objects, such as hammers, toy-aeroplanes, plants and ducks give his formally built up abstract painting some sense of humor. His paintings are precisely constructed and built up with several layers of oil paint, in which color plays an important role. The relatively small formats of his canvases fit in the old Dutch tradition of Easel-painting.

Roeland lives and works in Amsterdam. After his study he started exhibiting in 1965 and since 1969 regularly at Galerie Espace. In 2001 he started showing at Slewe Gallery. His work has been collected by several museums, such as the Stedelijk Museum Amsterdam, Van Abbemuseum, Eindhoven, Rijksmuseum Twenthe, Enschede, Stedelijk Museum Schiedam and Schunck in Heerlen. In 1997 a comprehensive catalog had been published, overviewing more than 25 years of his work, with texts by Elly Stegeman, K. Schippers and Anna Tilroe, along a travelling exhibition of his work at the Beyerd in Breda, Stedelijk Museum Schiedam and Rijksmuseum Twenthe, Enschede. In 2007 he had a solo exhibition at the Stadsgalerije Heerlen, on which occasion another catalog has been published, with texts by Tijs Goldschmidt and Jan Andriesse. 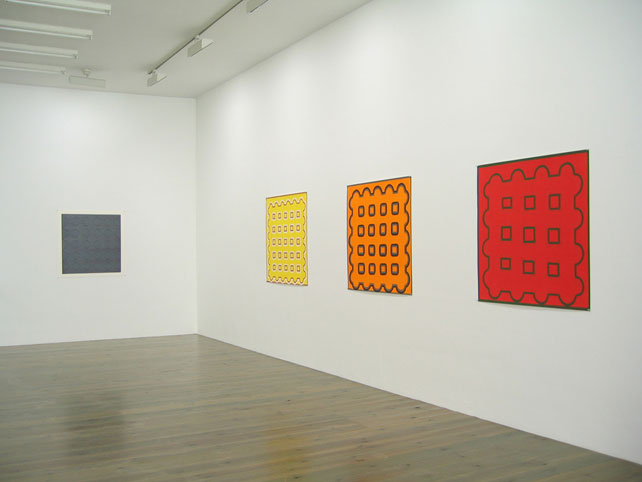 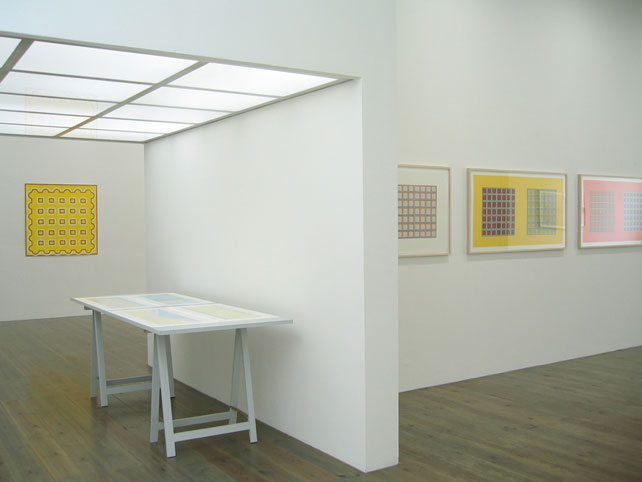 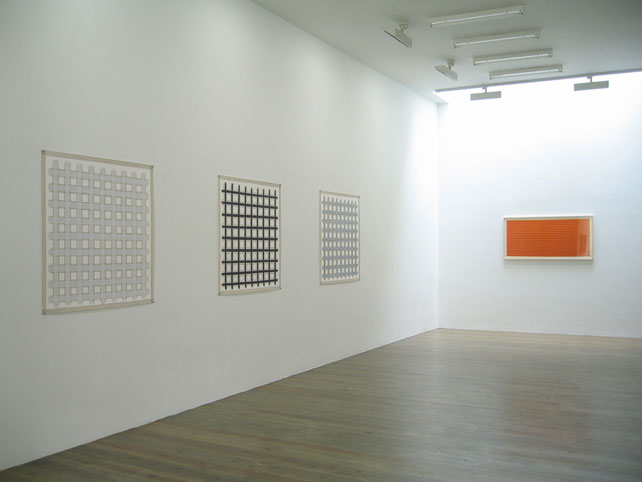 Slewe Gallery is proud to announce a new exhibtion by New York based artist Dan Walsh. The opening will be September 6 and the exhibition will last until October 4, 2008. In addition to some new paintings, there will be new works on paper, prints and artists' books on show.

Dan Walsh, born 1960 in Philadelphia, is today one of the most remarkable abstract artists in the United States. He makes playfully minimal abstract paintings, drawings and books, in which he explores ‘process generated images’, the artist’s method of creating images shaped by the process of their own making.

After his study at Hunter College he started showing his work, since 1993 at Paula Cooper Gallery in New York and later also at several galleries in Europe, such as Galerie Tschudi in Glarus/Zuoz (CH) and Xippas in Paris. Since 2003 he exhibited regularly at Slewe Gallery in Amsterdam. His prints and limited-edition books were subject of a solo show at the Cabinet des Estampes du Musée d’Art et d’histoire in Geneva (CH). Walsh’s work was also included in important group shows, such as the Ljubljiana Biennial, Slovena and the Lyon Biennial of Contemporary Art in 2003. His works have been collected by several internationally important private and public art collections, such as the MoMA in New York, Saatchi in London, FNAC in Paris and AKZO Nobel Art Foundation in Amsterdam. He lives and works in Brooklyn, New York. 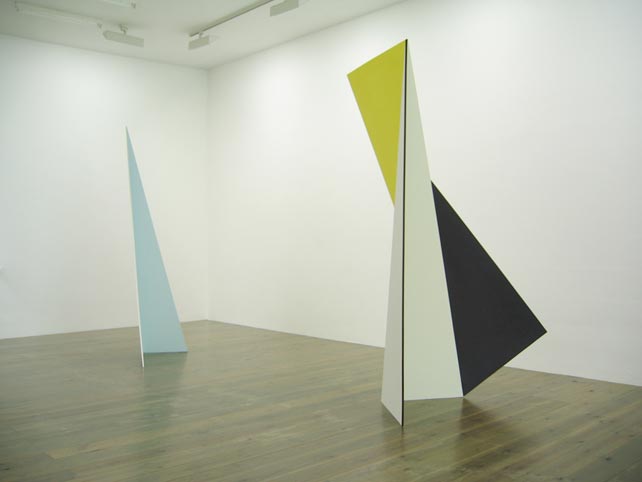 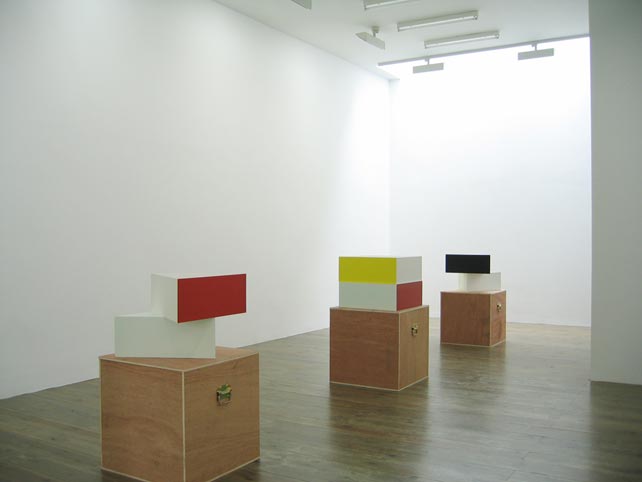 Slewe Gallery is pleased to announce the opening of the exhibition with new works by German artist Martin Gerwers. It will open Saturday May 17 and runs until June 14, 2008.

Gerwers, emerged with monumental geometric abstract paintings. He has recently extended his dicipline with 3-dimensional painted objects. Made out of triangular forms from wood they take the shape of dynamic pyramids, which define the surrounding space. His work is in the tradition of Mondrian and the American colourfield painting. Gerwers’ paintings and objects evoke space through big contrasts in light and dark, thin lines and broad planes of color and subtle differences in tone.

Martin Gerwers is born in 1963 in Velen (DE). He lives and works in Düsseldorf. After the Kunstakademie Düsseldorf, where he studied with Jan Dibbets, he exhibited regularly at Konrad Fischer Galerie in Düsseldorf and Galerie Tschudi in Glarus in Switserland. Since 1999 he has been exhibiting at Slewe Gallery. His work has been collected by several private and public institutions such as the Stedelijk Museum Amsterdam. 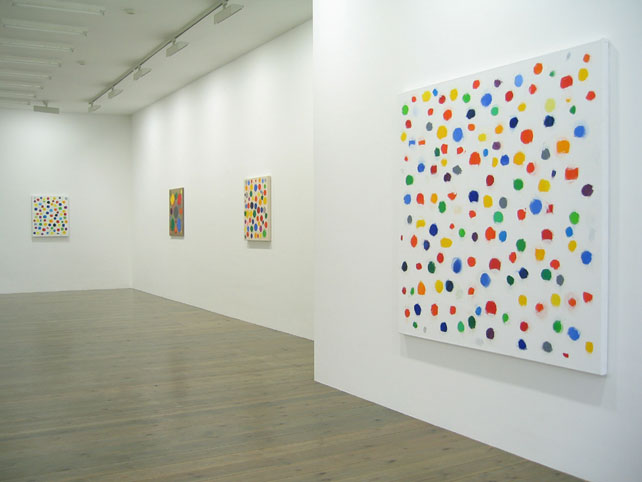 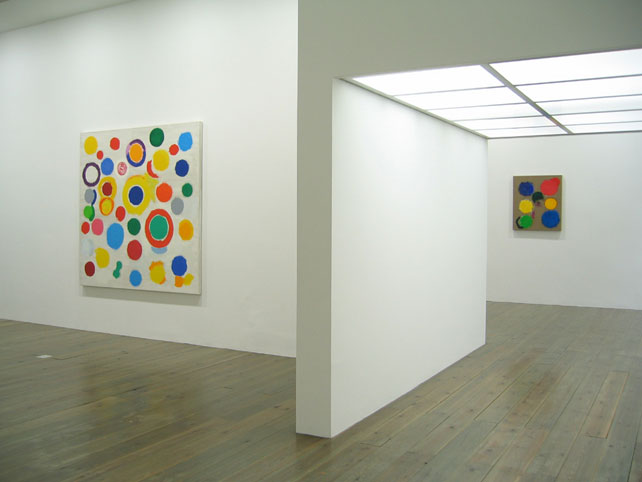 Slewe Gallery is pleased to announce the opening of the exhibition with new paintings by American artist Jerry Zeniuk on Saturday March 29, 2008. The exhibition will run until May 3, 2008.

Color is essential in the painting of Zeniuk. According to him colors are not only carriers of emotion, but their interaction reflects social and human relationships in general as well. Zeniuk became known in the seventies, when he participated at the Fundamental Painting show in the Stedelijk Museum in Amsterdam in 1975. Since then his paintings developed from a monochrome plane, in which several colored layers have been put on top of each other, towards compositions of contrasting color planes next to each other. His more recent canvases use different colored circles or dots or forms to create color interactions that create a specific pictorial space. They float on a whitish colored or raw canvas, but suggest space that is occupied with a retain light. The edges of these dots are in some cases sharp, in other vague and atmospheric. They are brought into a harmonious equilibrium and have a strong spatial effect. “Beauty”, philosophically and visually, is the ultimate goal in his paintings.

Born in 1945 in Bardowick (DE), as a son of Ukrain refugees, he emigrated with his parents to the United States in 1950, where he grew up in Colorado. After his study he moved to New York, where he had his first exhibition. Since the seventies he stayed regularly in Germany, participating in several exhibitions. Now he is living in Munich and he is regularly showing at Konrad Fischer Galerie in Düsseldorf and Berlin, and at Annemarie Verna in Zürich. From 1992 to 2010 he had been teaching at the Akademie der Bildende Künste in Munich. In 1999 he had an overview of his work at the Museum Lenbachhaus in Munich, Kunstmuseum Winterthur (CH) and Kunstmuseum Kassel, on which occasion a comprehensive catalogue had been published. In 2004 he had an overview of his water colors at the Kunsthalle Karlsruhe. 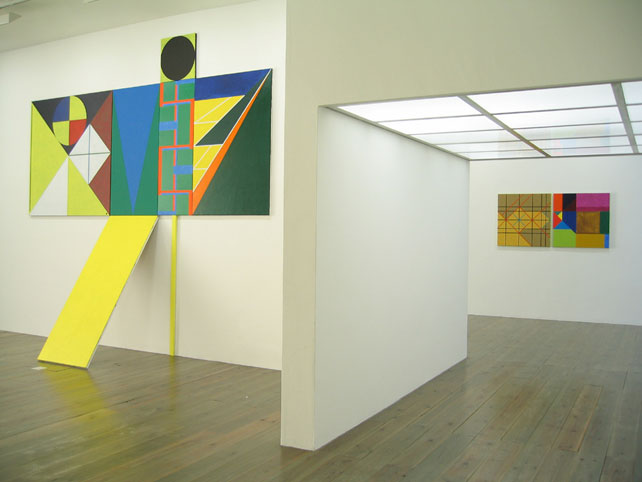 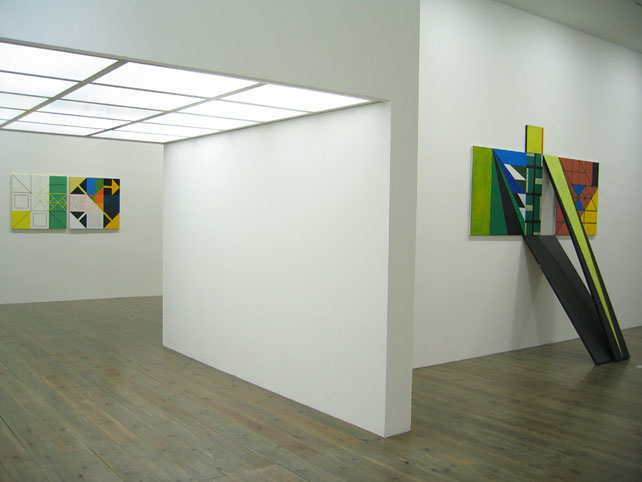 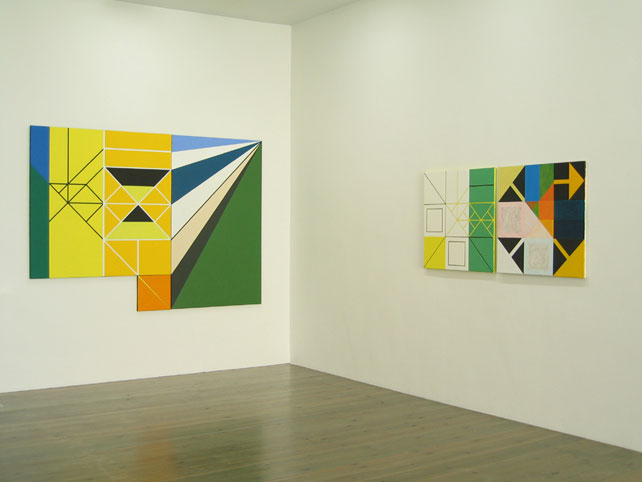 Slewe Gallery is pleased to announce the exhibition with new paintings by Dutch artist Kees Smits. The opening will be February 16 and will run until March 22, 2008.

Smits’ abstract geometric paintings deal with how one experience different perspective in the flat Dutch landscape. He tries to catch the panoramic view of the Dutch landscape in different schemes. He focuses on a literal perspective experience in viewing the space. Smits’ preoccupation with perspective on a flat plane goes back to the experiments of Russian constructivists such as El Lissitsky. His love for Malevich the way his paintings have been organized. Also in the use of bright and contrastful colors there ia a connection with the pioneer of abstract art.

Kees Smits, born in 1945 in Kortgene (NL), lives and works in Amsterdam. He became known as an artist at the time he participated at the Fundamental Painting show in the Stedelijk Museum Amsterdam in 1979. Since then his paintings have been shown regularly. In 1994 he had an overview of his works in the Centraalmuseum Utrecht, on which occasion also a catalog had been published. Smits has been showing at Slewe Gallery on a regular base since 1995. 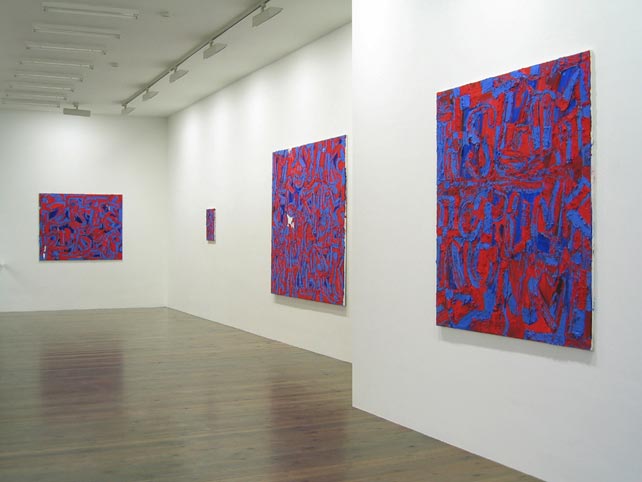 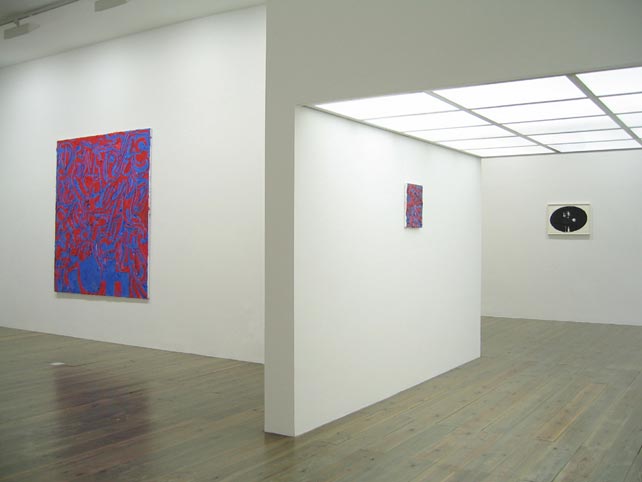 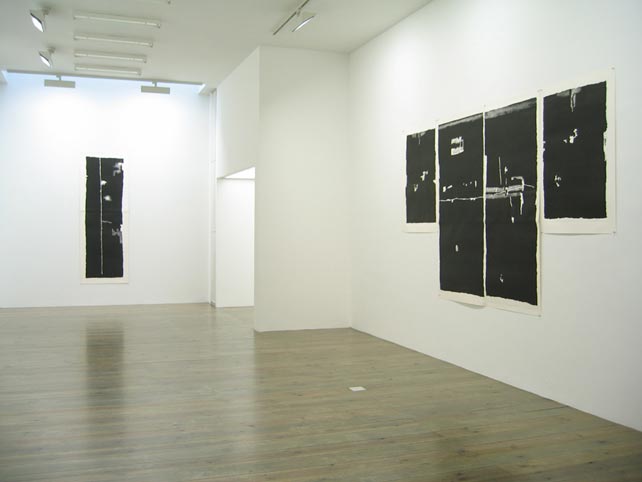